OSMOTIC NETWORK
The railway’s cut divides Espoo in two parts: to the north the administrative area and the park; to the south a less specialized area under development. By means of cuts and replacements, as well as redrawing the urban space around various functions, the project resews the railway’s break. Together with an osmotic process between existing things and transformations, the search for urbanity urges the project to find complex relationships between the parts: articulated urban spaces in which public mingles with private, private with collective. A red thread has been found within the area a network of relationships, along which functions intersect in both directions with a Southern Espoo railway station/road/buildings/square/town hall-park Northern Espoo succession. In particular, linking up again with the existing paths, the upper-level network of paths identifies the city of covers. Through the covers the perception changes: the relationship with the park, the landscape and the Cathedral grows stronger, the city lives a multilevel dimension. The new orography changes with the succession of the seasons turning from the white colour of the snow to the green of the garden roof. Together with the new residential, cultural and commercial functions, the presence of schools, park and offices will make the area a living and lived place. The long period of transformation, which will go on until 2030, will allow Espoo a slow stratification

KIRKKUJARVENTIE ROAD AND THE RAILWAY STATION
In order to turn Kirkkujarventie Road from a connecting road into an urban path, as well as redrawing the road section, the curtain of residence and railway’s facilities has been defined. In the project, Kirkkujarventie Road presents a slight bending, a slow crossing of Espoo, an undifferentiated car path. The redrawing of the road outline allows a wide pedestrian space along which commercial activities and a system of urban furnishing follow one another. On the railway’s side, a practicable belt solves the tracks’ edge. Below the belt, kiosks and facilities will be made

THE SQUARE OF THE TOWN HALL
The trapezoidal square of the town hall opens on Kirkkujarventie Road and on the park. The functions required for the town hall building have been subdivided in two buildings: the offices in the building as a counterperspective of the town council hall; the info-point, the permanent exhibition space, the temporary exhibitions space, the drawing and party room, the restaurant and the café in the lozenge volume laid within the square. These public functions, which are spread along the building’s perimeter, are in a “domestic” relationship with the citizen: a place where public spaces mingle with collective and private ones. Purified from the bureaucratic offices, the Town Hall building is conceived as the extension of everybody’s home. The square of the town hall is their identity place.

THE SQUARE OF THE TOWN HALL AND THE PARK
The hourglass narrowing of the square of the town hall marks the path for Espoonjokilaakso park. The lozenge building of the Town Hall is part of the facilities following one another along the park. The facilities include private activities linked to commerce, free time, culture, sport. This new edge mediates the relationship between park and built-in areas. Along the path of the red thread, that starting from the Town Hall reaches the Cathedral, buildings change. Almost as complying with an evolutionist process, you can go from artefact to nature: materials and forms change in a growing relationship with the park and you can go from contemporary technologies to bricks and wood as well. In the last line building forms themselves are part of the soil. All the covers of the facilities are practicable and partly used as a garden roof. The ones near Lagstads school and Lagstads nursery are upper-level and can be used also by the schools. The park facilities integrate also the wooden residential building and the nursery enlargement to the north. On the top, a pedestrian precinct, partly for cyclists, links the facilities with the park, with the building of the Town Hall, with the bridge-path and with the railway station. The newtork links the parts with the landscape.

CYCLE-LANES, PEDESTRIAN PRECINCTS AND PARKING AREAS
Existing pedestrian precincts and cycle-lanes have been preserved. The redrawing of the area schedules an enlargement of these paths and the definition of pedestrian precincts or reduced traffic areas. The square of the Town Hall is fully pedestrian as well as the park within the built-in area. In Kirkkujarventie Road and Kyrkogatan Road equipped sidewalks are scheduled. In particular, Kirkkujarventie Road has been transformed in a wide park-road in continuity with Espoonjokilaakso. Residential buildings have a covered parking area, which has been obtained from the elevation of the pattering of the courtyard. As well as the scheduled areas, offices and remaining activities will use the rock parking area. Entrances and links with the rock parking area have been integrated with the Espoo redrawing.

RESIDENTIAL BUILDINGS
Residential buildings have a double identity: a commercial base and offices towards the road and a reserved, domestic relationship in the inner part. Residential cells are conceived as “passing” cells. Completely filling the building’s thickness, the residence allows overlooking both on the road and on the courtyard. The passing cell allows light penetration for the whole sun arc, still in winter. On the cover, the building lifts with small garden-roof courts.

THE PALACE OF THE TOWN COUNCIL HALL
The palace is conceived as a counterperspective of the Town Council Hall. In this way the relationship of the hall with the square of the Town Hall is recovered and the location of the offices is solved. In section, the building is subdivided as follows: the offices on the first and second level; three levels with residences and a final level with common spaces. In the first two levels the foyer of the Town Council hall has been obtained. 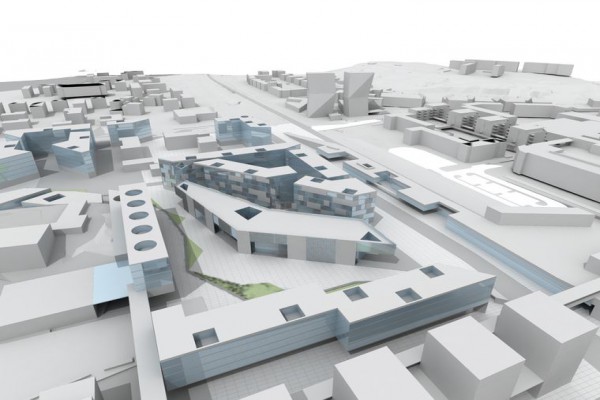 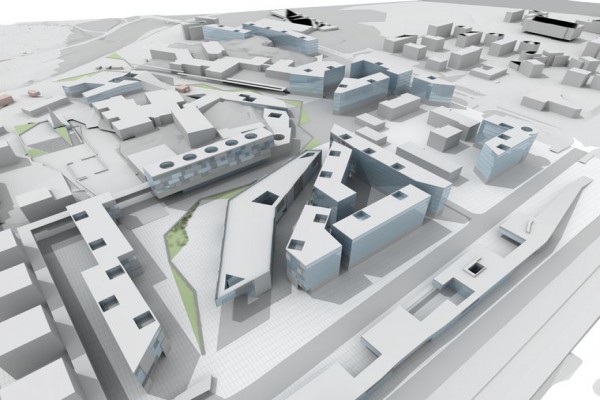 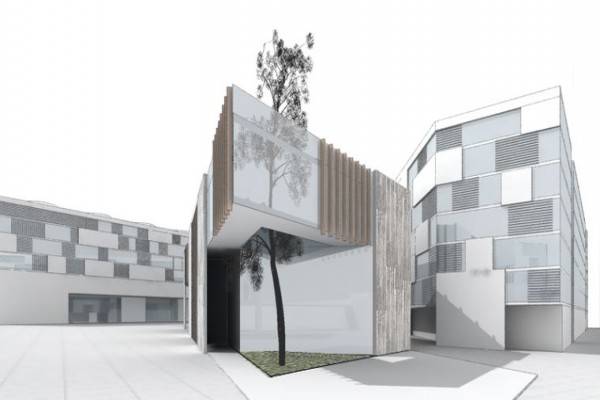 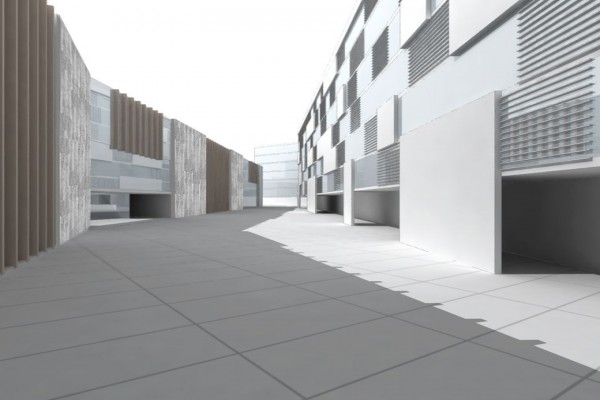 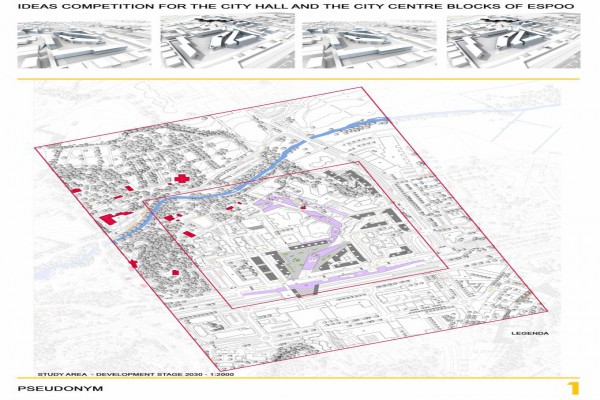 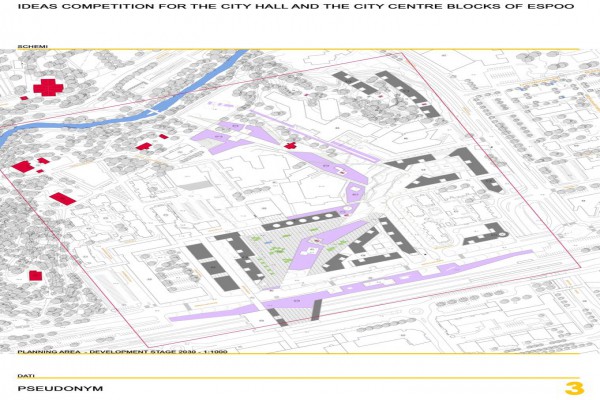 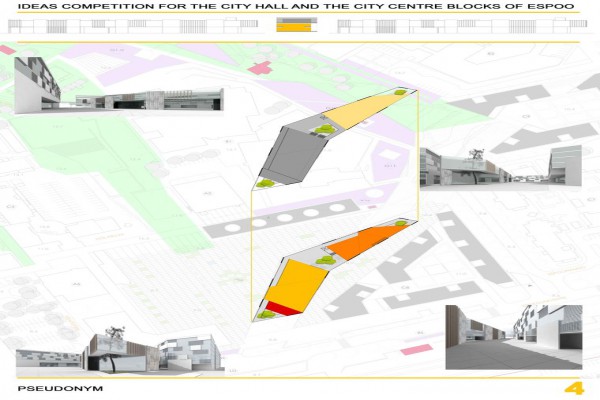 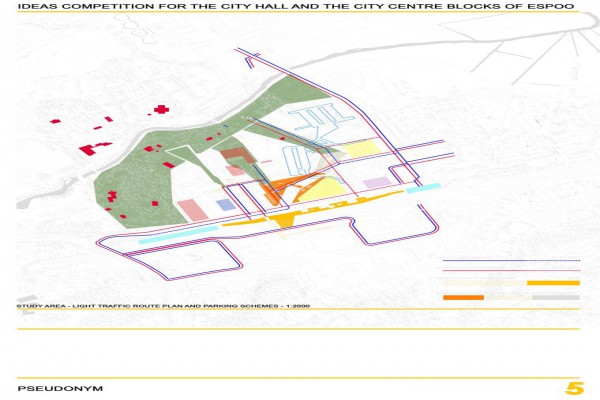